We talk with Matt Stoller about his book GOLIATH: The 100-Year War Between Monopoly Power and Democracy.

Then we replay an excerpt from our interview last year with Thomas Frank about populism-real and fake. He’s got a new book out about it, The People, No.

Writer’s Voice — in depth progressive conversation with writers of all genres. On the air since 2004. Rate us on iTunes or whatever podcast app you use! 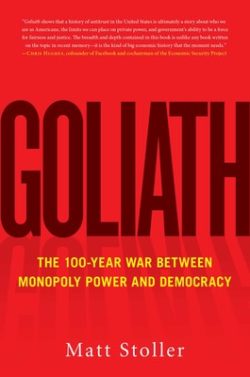 Americans once had a coherent and clear understanding of political tyranny. A concentration of power, whether in the hands of a military dictator or a JP Morgan, was understood as autocratic and dangerous to individual liberty and democracy.

This idea stretched back to the country’s founding. In the 1930s, people observed that the Great Depression was caused by financial concentration in the hands of a few whose misuse of their power induced a financial collapse. They drew on this tradition to craft the New Deal.

Matt Stoller’s book Goliath looks at the struggles over monopoly power and democracy. He’s also the author of the blog Big, which examines monopoly in the news, covering topics from big Pharma and Big Tech to sports and podcasting.

Listen to an except from GOLIATH

We hear a lot about populism these days, but, as discussed in our first segment, the populism that’s being roundly condemned as the ideology of the rightwing is a far cry from the original sense of the term that we know from American history.

How did the name of such an important progressive movement get turned on its head by those who link it to right-wing racism and nationalism?

Thomas Frank has been thinking about that for a long time. In 2018, he wrote a piece for the Guardian entitled “Forget Trump – populism is the cure, not the disease“, and has recently come out with a book about the topic, The People, No. (We hope to be talking with him about that book later in the season.)

But we actually spoke with Frank more than a year ago about the topic, so, in light of our discussion with Matt Stoller, we decided to re-play part of that conversation with Thomas Frank.