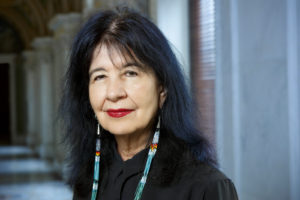 Congratulations to Muscogee Creek Nation poet Joy Harjo who has been appointed the Poet Laureate for the United States, succeeding Tracy K. Smith. Joy is a poet, writer and musician whose work has inspired for many years. She is fearless in her work, unflinching in her approach to language and the worlds of spirits and of humans. Her many books include Conflict Resolution for Holy Beings, How We Became Human, A Map to the Next World, and the ever-gorgeous collection, She Had Some Horses. I interviewed Joy about her memoir Crazy Brave in 2016, which you can find on Writerscast here.

“It’s such an honoring for Native people in this country, when we’ve been so disappeared and disregarded,” Harjo says. “And yet we’re the root cultures, over 500-something tribes and I don’t know how many at first contact. But it’s quite an honor … I bear that honor on behalf of the people and my ancestors. So that’s really exciting for me.”

And for all of us as well…. 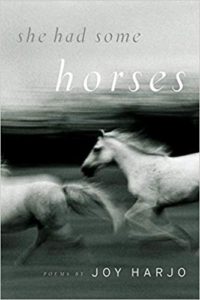 From Conflict Resolution for Holy Beings:

Recognize whose lands these are on which we stand.
Ask the deer, turtle, and the crane.
Make sure the spirits of these lands are respected and treated with goodwill.
The land is a being who remembers everything.
You will have to answer to your children, and their children, and theirs—
The red shimmer of remembering will compel you up the night to walk the perimeter of truth for understanding.
As I brushed my hair over the hotel sink to get ready I heard:
By listening we will understand who we are in this holy realm of words.
Do not parade, pleased with yourself.
You must speak in the language of justice. 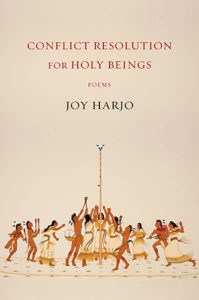