Is the Democratic Party doing enough to reach out to rural voters? We talk with Jane Kleeb, chair of the Nebraska Democratic Party about her book, Harvest the Vote: How Democrats Can Win Again in Rural America. (Harper Collins, 2020).

Then, a powerful vision of creating a livable and just world for everyone. We talk with climate journalist Eric Holthaus about his book The Future Earth: A Radical Vision for What’s Possible in the Age of Warming.
(Harper Collins, 2020).

Writer’s Voice — in depth conversation with writers of all genres, on the air since 2004. Rate us on iTunes,  Amazon Music or wherever you get your podcasts! It really helps others find our show.

Jane Kleeb
The Democratic Party used to be big in America’s rural heartland. Wisconsin was once a bastion of progressivism, and Democrats were regularly elected to Congress from midwestern and other rural regions. 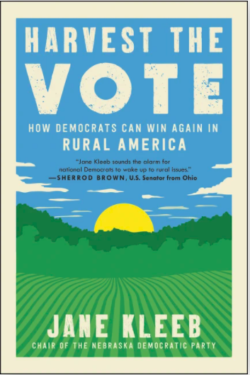 But lately, The Democratic Party has lost an entire generation of rural voters. By focusing the majority of their message and resources on urban and coastal voters, Democrats have sacrificed entire regions of the country where, as our guest Jane Kleeb says, there is more common ground and shared values than what appears on the surface.

In her book Harvest the Vote, Kleeb makes a powerful argument for why Democrats shouldn’t ignore rural America. On issues from climate change to health care, and education to corporate overreach, Kleeb shows that by paying attention to the voices and needs of rural voters, the Democratic Party can bring them back to the Blue fold — and improve its own responsiveness to the needs of ordinary people.

Jane Kleeb is the chair of Nebraska’s Democratic Party and founder of Bold Nebraska, an organization that has built a powerful coalition of Native tribes, farmers and ranchers to oppose the Keystone XL Pipeline.

Read an excerpt from Harvest The Vote

Eric Holthaus
There are a lot of books that, rightly, warn us about the dire state of the climate and the uninhabitable Earth we are hurtling toward.

But there aren’t so many that show us what the Earth could be like if we use what we already know to reverse the effects of climate change over the next three decades.

That’s what climate journalist and meteorologist Eric Holthaus does in his visionary new book, The Future Earth. He invites us to imagine how we can reverse the effects of climate change in our own lifetime.

Holthaus also encourages us to enter a deeper relationship with the earth as stewards and to re-affirm our commitment to one another in our shared humanity. It’s all part of the same shift in consciousness and action we will need to survive and thrive.

Eric Holthaus has written for the Wall Street Journal, Slate, Grist, and The Correspondent, where he currently covers the climate crisis.

Read an excerpt from The Future Earth