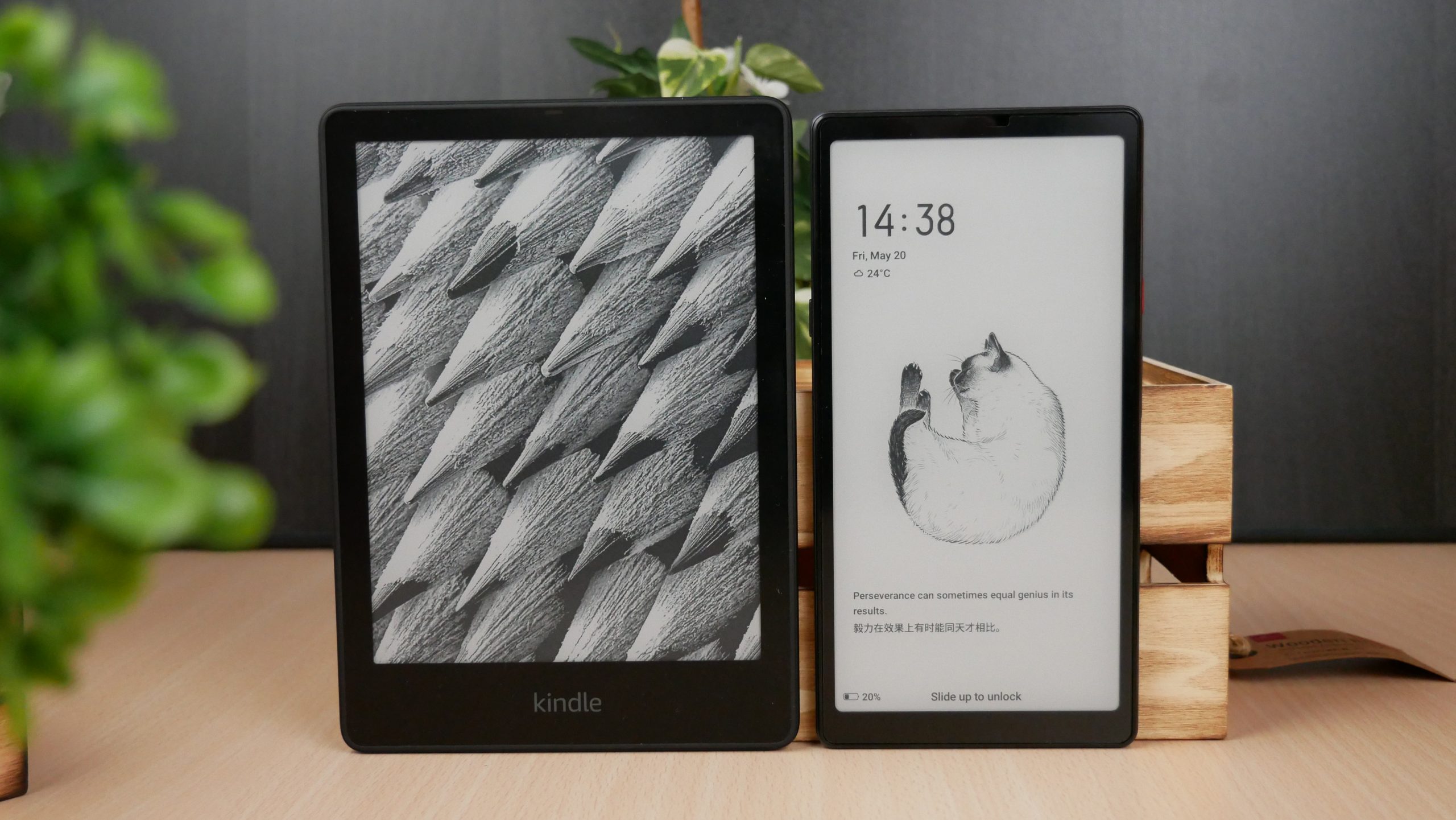 The Hisense Hi Reader is the first dedicated e-reader that Hisense has ever produced and today we are looking at how it compares against the 11th Generation Kindle Paperwhite Signature Edition. On Paper, these devices are quite similar to each other. They both have large screens, similar specs and have 300 PPI, for high resolution fonts. The software though, is dramatically different. Hisense has the ability to run Android apps, so you can sideload in your own. However, their online bookstore and App Store all have Chinese content and no English. This makes it hard for an English speaking audience to find value, instead, you basically have to load in your favorite app store or exclusively sideload. The Kindle, well, the bookstore, Audible store and everything else is localized to your region, so no matter what language you speak, chances are you can buy digital content via Amazon.

The Hisense Hi Reader features an E INK Carta HD 6.7-inch E Ink display with 300 PPI resolution and an 84 percent screen-to-body ratio. The display allows for 36 white LED lights, that allow you to adjust the brightness with a slider bar. Hisense has never included a warm light system on any of their devices. It has a candy bar design, so it is very tall and not very wide. Under the hood lies a 1.8GHz UNISOC T610 Octa-core chipset that is coupled to 4 GB RAM and 64 GB of native storage. You can connect to the internet via WIFI and it has Bluetooth 5.1 to pair wireless headphones or earbuds to listen to audiobooks, podcasts or music. There is a single speaker on the bottom, which provides a bit of audio power, but headphones would be better. There are volume buttons on the side to adjust everything to your liking, I really like how there are physical keys for this sort of thing. Power comes from a 3000 mAh battery that should allow for decent run times, it has a USB-C port for charging. The Hi Reader runs Android 10 OS and does not come with Google Play or Google Services.

The Paperwhite Signature Edition features an E INK Carta 1200 touchscreen display with a resolution of 1236 and 1648 and 300 PPI. The screen is completely flush with the bezel and protected by a layer of glass. One of the nice things about body, is that the bezels have been slimmed on each side and the top of the device. There are some tremendous benefits of the new Carta display panels, such as a 20% increase in performance and this directly allowed Amazon to create the new animated page turn system. There is support for E INK Regal technology for image updates. Regal virtually eliminates the need for a full refresh, giving the viewer smoother viewing transitions. You can adjust both the front-lit display and color temperature system, since it has both white and amber LED lights.

Underneath the hood is an MT8113 SOC 1 GHZ processor, 512MB of RAM and 32GB of internal storage. You will be able to connect it up to your MAC or PC via an all-new USB-C port. This is something that people have been asking Amazon for years about and they finally delivered.  What is interesting about the USB-C port is that it has moisture detection. If the device is wet, a notification will appear on the screen, and you will be unable to charge your Kindle until it is dry. Amazon says you can still use your Kindle after getting a liquid detection notice, but you just won’t be able to charge. However, you can still use the quick charge function, such as a charging pad to bypass this.

On a pure hardware level, the Hisense beats the Kindle. It simply has more RAM, additional storage and a better processor. This is needed because it runs Android, which tends to require additional power, whereas the Kindle runs Linux, which is more stable, and doesn’t require a huge battery. On a software level, the Kindle is better. It is easier to buy buy audiobooks, books, comics, manga, and everything else. The store is localized to your region, so in Canada, I will primarily see a mix of US authors, but some Canadian ones too. Hisense is primarily marketed in China, the bookstore and app store only have Chinese content, so there is no value for people who speak English. The Hisense also, doesn’t really support any other languages except English and various Chinese languages, whereas the Kindle supports 30+ languages.

Lets talk about digital content. The Kindle has a wider screen, than the Hisense. So, it will fit more text on the screen. The Hisense is more like a traditional smartphone, so people who read primarily on their phone, and have never had a Kindle e-reader before, will feel right at home.  Using the Kindle app on the Hisense vs the Kindle, the reading experiences are very similar. You have full control over fonts, margins, linespacing etc. The Hisense has a bit of an advantage because your not locked into one specific ecosystem, but you can branch out, such as being able to borrow library books via Libby or a rival bookstore.

When it comes to comics, manga, PDF files and image heavy content, the Kindle wins. There are lots of whitespace between where the image is and the top and bottom of the screen, whereas the Kindle shows it relatively at full screen. For example, using the Kindle e-reader with the exact same PDF file, showed it almost end to end, with a small separation between the top and bottom  of the screen. The Hisense boarders were more pronounced, the PDF was almost centered, leaving more space around the sides and top of the device. The same problem happened with manga, it looked better on the Kindle. However, page turn speed and performance was a little bit better on the Hisense, page turns were a little bit faster.

All in all, both e-readers bring a lot to the table. The Hisense has better specs and is pocket friendly, so it is easier to transport it around. You can also hold it in one hand, much like a smartphone. Android is a big draw, since you can craft your your user experience, the various speed modes are an added bonus, which makes even YouTube videos watchable. The Kindle wins on the software level, everything is streamlined and easier to use, they have the best bookstore in the world and widest selection of Audible titles. I find that it is easier to get invested on a Kindle e-reader than an Android reader, since it requires more work to sideload in content and keep everything updated.

The Kindle Paperwhite Signature Edition tends to cost around $199 in the US and prices vary in international markets. The Hisense Hi Reader is a bit more expensive, it retails for $399 USD.